Of the Matatus and Peculiar Passengers 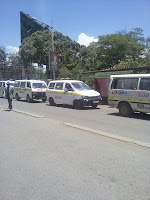 The matatu industry may have generated a culture of its own. Before the late John Michuki stepped in and brought order, the industry was unregulated and renowned for reckless drivers, rude touts who hardly took showers for days on end and overpacked passengers squeezed in seats like sardines in a tin.

The adage that things changes on the outside and only remains the same on the inside holds true for this sector. Despite the stencilled passenger numbers on the vehicle’s body, which reads anything like, ‘mtu 14’ ‘vichwa 14’, ’14 skulls’ and so on in a creative fashion, the truth is, a fourteen seater carries eighteen passengers at most.

Though professionalism is witnessed across several matatu saccos, some are known to break laws with impunity. Touts rudeness is so ingrained that it is part of qualifications to this sector.

I wonder if many have seen the paradox of some places in Dundori Ward. That we are endowed with good weather conducive for a variety of agricultural activities is not in contention. The fragmentation of land into minuscule plots that are put up for sale, however, is seeing a slump in food production. (In reality, the same ‘tried and tested’ farming practices are largely to blame for low yields, as there is little room for innovative ways to maximize on yields).

For long, water supply was adequate, until recently when it became erratic. To say the rains have been good and the rivers are once again flowing is to deceive ourselves. Not until when you realize the trickle flowing into the pipes do you begin to see the big picture. There is actually no water! When rationing is currently at January levels, where in some places water flows once in a week, and for a limited time, it is inevitable to say a crisis is looming.