Showing posts from September, 2018
Show all

Of Mama Mbogas and their Strange Source of Wealth 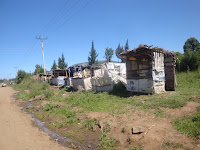 That mama mbogas are a hardworking lot is no contention. Some can invade markets as early as 3a.m to get the best of fresh products for their roadside stalls or to supply where they have landed lucrative contracts. A story is told of a banker who was surprised by the amount of money a thriving mama mboga used to deposit each other week. On questioning her closely, it is said he realized there was much money to be made out there than sitting in an expansively furnished office donning a suit and a tie daily - that he too ventured into green grocery business.   However, a close look at some of mama mboga run sheds returns a different narrative. Not all can fit the bill of the above highlighted example. Some of the makeshift sheds can be said to be fronts for illegal activities than genuine businesses. It behooves one's mind to learn, for example, that a mama mboga runs a green grocery business netting a daily profit of less than Sh300 but lives in a rental unit charging a mon
Post a Comment
Read more

In Food Crisis of Own Making 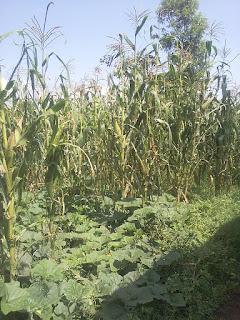 Mr Mkulima is a farmer of renown this part of our village. He is a noted hardworking man no wonder praiseworthy names have been ascribed to him as titular honours. The one we've come to associate him with is that of Farmer Number One.   Before each planting season, he sets the precedent that other farmers emulate. If, for example, he begins clearing his shamba the residues of the last harvest, farmers likewise follows suit. This is irrespective if the rains are a month or two away. When you hear the villagers say that Mr Mkulima can forecast rains with an accuracy that can baffle the local weatherman, you better take cue and prepare your land accordingly.   That Mr Mkulima is an indisputably hard worker is reinforced by the fact he rises early and can be seen most of the day tending to his crops. Despite the fact most of farmers here owns pieces of land less than an acre in acreage, Mr Mkulima beats them hands down when it comes to harvesting. The much each farmer would
Post a Comment
Read more

The Next Pablo Picasso

Dennis Thuita dropped out of Technical University of Mombasa where he was pursuing a degree in building and civil engineering. The latter was not an accredited course, which saw him forgo his studies and instead focus on being an artist. The early twenties artist doesn’t regret the path he took despite criticism from several quarters that he is wasting away ‘doing nothing’ instead of working in a white collar job. Art to him is like any other career that puts his food on the table as well as in meeting his other financial commitments. His tools of trade are ivory papers, pencils, brushes, canvases, acrylic and oil paints. Why the art?   I would be an engineer today or in another career field that is deemed ‘normal’ for a graduate and not being an artist. Art is something I have engaged in for so long and which has been part of my life. It is something in me – an innate skill. Back then when I was a pupil at St Lwanga Primary School in Bahati, Nakuru, I would draw from ob
Post a Comment
Read more
More posts