Sam Wachanga: My 21 Years as an Alcoholic 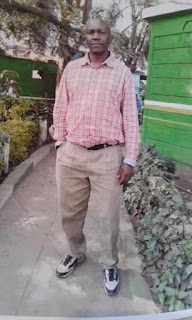 For twenty one years, I was enslaved by the demon of alcohol addiction. I was always inebriated most of the time. But what I thought was a cool lifestyle became a problem not only affecting me but my own family and was to cost me two marriages in the process.

But how did alcohol came to enslave me? I was born forty six years ago in Nakuru County. My father loved tipple much and would brew his own beer, the traditional muratina, and drink at the comfort of his home though he was also a social drinker who would stagger home from pubs as well. In his drunken state, he loved to regale us children with stories, though many were improvised versions from his drunken stupor. I thought alcohol was good stuff seeing how it was rendering him into a griot or great storyteller especially the ease with which he effortlessly narrated one yarn after another.

My dad indirectly influenced me to like alcohol. He was ever in a jovial mood especially when drunk and I thought happiness was to be found either in the bottle or in his beloved home-made brew. Out of curiosity, I began experimenting with alcohol. And before I knew it, I had not only liked its taste but had already fallen in love with it!

The problem with being an alcoholic is lack of financial discipline or prudent spending. I would, for example, spend the whole of whatever amount I had in one sitting and leave the pub or sheben in high spirits only to have recriminations when I sobered or woke up the next day to discover I had no coin to my name. But with cravings to whet my insatiable drinking appetite, I had to devise ways to obtain money and chief among them was to lie to my parents, and if I could not have my way, I would steal from them.

It reached a point my parents could not tolerate my behaviour and gave me a share of family land hoping I’d settle down perhaps as a farmer and get traction in life. Unfortunately, they invariably handed me a piece of ‘gold’ which was to help sustain my drinking habit, for, shortly after my father died, I began subdividing the land and selling a plot per year and drinking every coin until the next ‘pay day’ when I would sell another plot and repeat the same process.

In between, I got married twice. The first marriage, in which I was blessed with a child, lasted briefly as my spouse could not put up with an alcoholic husband who rarely provided for his family and was more in beer dens. The second marriage, which produced three children, seemed to be working well but, like in the first one, it too fell apart with my spouse taking all the children with her. My uncontrollable drinking behaviour is highly to blame for the breakups.

And in both marriages, my families were always the laughing stock of the estate as sometimes they would be informed where to pick me from in case I blanked out in a trench while on my way home. It was also humiliating to have to be fed by any of my spouses when I was not working or unable to provide for them!

The breakup of my second marriage would have served as a sobering point especially in freeing myself from the shackles of alcoholism but far from it. I had by then sank to the abysmal depths that everything alcoholic was the elixir of life that I could hardly function without it. In forgetting the misery or the depression that I had sunk into, I began selling everything I had and drinking hard like there would be no more beer tomorrow.

Of all my siblings, it seemed I was the one who took the path down to alcoholic ruin, but little did I know one of my young brothers was also in it. Unfortunately, he succumbed a few years back to kidney failure after taking too much of bootleg liquor, mainly chang’aa. I remember attending his funeral ceremony in a drunken state that I hardly saw his coffin in my dazed state. When I sobered up many hours later, I was devastated by his death and knew I too would end up in a similar way unless I changed for good.

The turning point was when I bumped into an old friend with whom I used to drink together with and who had managed to quit the bottle after undergoing counselling. I was surprised by his complete turnaround and he helped me towards the path to recovery especially referring me where to attend the AA (Alcoholic Anonymous) meetings. I believe it is essential for an addict or an alcoholic to seek help from a former addict/alcoholic who was in similar shoes and understands one’s predicament better.

During the recovery time, I became an alcoholic and drug addict counsellor and was in that profession for three years before leaving to pursue business interests, and I’m currently a businessman. Had I not imbibed alcohol, I would be a different person today. Alcohol never made me any better but left me in a worse shape. It led to disintegration of my marriages and cost me a career and impoverished me as well. The twenty one years the bottle was my constant friend were twenty one wasted years.