Clear the Mind of Clutter with an Excursion to your Backyard 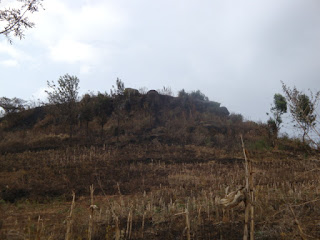 Standing at the summit of a hill or a mountain and looking at your surroundings from that vantage point can be exhilarating. It is as though you’ve conquered a strong giant and you can jump up and down giving out whoops of joy to the delight of none other than your satiated heart.

Mountaineering is one of my hobbies, but over the years, I’ve given it a wide berth owing to the ups and downs of the life’s rat race. Of course, we all gets encumbered with cares of life that we hardly takes note when lethargy sets in and our pastimes slowly becomes things of a remote past.

The other day, I reignited this idyllic passion and set to the east of my general residence. The hill is simply known as ‘Kirima’, which simply translates as hill. It has been denuded of tree cover with few trees scattered here and there with surrounding peasants given minuscule plots to farm. These handkerchief sized pieces stretches all the way to the rocky summit. And how they manage to climb up or down through narrow footpaths that winds through ledge-like rocky outcrops is simply amazing. And it makes for an interesting observation seeing, when they are carrying down farm produce, they have to make delicate balancing acts that gives impression the body is being gyrated to counteract laws of physics.

During colonial times, the hill formed part of the ‘native reserves’ when the locals were uprooted from their lands and herded together like animals in an enclosure with the whites taking over the vast swathes of low lying land that stretched as far as the eye could see. (Stretched, for before independence and subdivision of formerly white farms, a single white owned land in thousands of hectares while the ‘native’ lived like a squatter in his land) No remnants of earlier settlements are observable, for forest reclamation efforts from the colonial times were methodically done like in erasing off any traces of a dark chapter.

I think the last I was here was five years ago. During those days, climbing up with much ease was my wont. But on this sultry Sunday, it was a different story. The last I took of much physical exertion not related to climbing could have been ages ago. With each step forward, my calf and thigh muscles strained as the bodily pores released sweat. The only regret I had was not bringing with me a bottle of water, but recalling that once upon a time there were rivulets trickling from under the rocks and some places were observed to be moist irrespective whether it was dry season, I reasoned it best to look for any of these rivulets. There was none, for where one once flowed from; a narrow dry trench punctuates the water course with peasants already permitted to farm whatever was left of the natural spring – no wonder water issue has become a chronic problem in the surrounding villages. The same story was replete even in formerly wetlands which today are as dry as Sahara desert.

By the time I was halfway going up, I was sweating to the extent that my shirt was stuck to my back. It necessitating taking a breather and licking the dry lips to keep them moist. It didn’t help the matters to realize the toes were hurting on account I had chosen to come with leather shoes.

In the past, I would sit on a flat, table like rock on the summit and scribble poetry lines on my notebook. This rock, which I had nicknamed ‘Dreyfus Seat’, is what I was aiming for. And with eyes fixed, or with my focus to it, I began my laboured upward mobility. What slowed the progress, however, was the strong breeze blowing. Though it had the effect of cooling down the perspiring body, it made breathing hard that I had to take mouthful of air to help aid the process.

The way the ‘spine’ of the hill had been tilled left little room for doubt of the extent of likely soil erosion when the rainy season commences proper. If last year is anything to go by, where heavy soils and boulders washed down and wrecked the house of a nearby peasant to the hill, lessons should have been drawn from here and farming on the hill abolished altogether with trees planted. But who cares to listen when the talk is that the hill is communal land and, as shareholders, the residents have rights to it including farming? Or, as they put it, enhancing food security?

Panting heavily, I managed to amble up to Dreyfus Seat and sat down. It had weathered with time, having been battered by weather elements. That was beside the point. As I edged closer to its jutting edge, I could feel my legs shaking. Any misstep or slip of footing and I would have literally flown through the air to land several hundred feet below.

I sat down and surveyed the surrounding. To the west Nakuru town was enveloped in a hazy mist. To its left, Lake Nakuru was turquoise blue with whitish shorelines. To the right, Menengai crater gave the impression of a yawning giant with the mouth forever stuck in a striking posture. The sun looked like poised to take a setting dip in this giant’s mouth as it traversed to the western horizon.

What struck me as ironical was the sight of villages covered with more tree than the forest nearby. Once upon a time, the government managed forest was thick, so thick it was eerie dark in broad daylight. But during the regime of President Daniel arap Moi, the forest cover depreciated so fast when well connected lumbermen were given permits to harvest mature trees. And in what was seen as a measure in boosting food security, peasants in surrounding areas were permitted to farm. The results of bad policies were not long in coming with rivers and springs drying up completely. The Mwai Kibaki regime tried reclaiming the forest and the company that was contracted to replant trees, Comply Industries, saw commercial value in the whole deal and planted the eucalyptus variety for its saw mills all the way to riparian areas instead of the cypresses with the former further draining completely any available water.

Whereas scaling up seemed more exerting, the down climb was not smooth either. I had elected to go down by the way of the steeper side rather than retrace my steps back. The hairpin bends as the footpath meandered on the hill’s ‘ribs’ sent shiver down the spine. It was like walking on a sharp knife’s edge, and any slip of feet would have sent me careening down the steep incline. To look down below was enough to make knees buckle for those with acrophobia.

Passing through the forested parts made me feel being at harmony with the nature. The pure air combined with aromatic smell of some trees was like soothing balm to the heart. It was a refreshed me that emerged from this excursion as the sun sunk down beyond the Menengai crater.