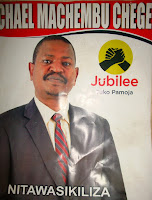 Depending on how you see it, ‘nitawasikiliza’ can be an ambiguous term. It is in present tense to begin with, meaning one can only be heard before an action or event had taken place, though there are differing interpretations out there. But Dundori ward representative, Machembu Chege, avers this is not a broad based term that can be taken out of context and its literal meaning is ‘ready to lend a keen ear’. This, in lay man’s term, means the leader is ready or willing to give considerations to issues dogging the ward, but only after they are raised! (My take, anticipatory leaders can identify what needs to be done and take timely action before the problem reaches an unmanageable or a costlier level).

I bet my two cents the MCA may be development oriented. Whereas his predecessor is accused of sleeping on the job, taking long to settle down before initiating few developments projects here and there, Machembu is setting a precedent. Literally, he hit the road running by grading roads, with one or two here and there left in such a state one would be forgiven to say Hitler's battle weary machines passed by on their doomed march to Stalingrad!

As an avid literature lover and critic, I’d have loved to be presented with a booklet, if not a tome, of the Nitawasikiliza manifesto in order to orient myself with and keep track of the basket of promises he has for the ward. Any verbal promises made on campaign trail may have escaped my memory, for, unlike written words, spoken ones are hard to retrieve from the recess of one’s memory. How can a leader be kept in check based on remarks that may not be substantiated?

What, for example, does the mheshimiwa intend to do in area of youth development? It has become a precedent to sponsor youth sporting activities and present the winning teams with prizes like balls, pangas, jerseys and few cash handouts. Does this really develop the young persons? In case of football, have we ever seen talented young men of this ward plying their trade at the domestic first or second tier football clubs courtesy of MCA sponsored tournaments? Cases of talents going to waste are replete, as those who would have lived off sports are rarely spotted. Liaising with sport scouts will see the future McDonald Marigas or Dennis Oliechs in our midst exposed and maybe nurtured in soccer academies or signed into teams at competitive levels.

Youth development is not all about different sporting disciplines. Our leaders lost the plot long ago by failing to identify areas to develop youth economically. It is a crying shame we have a 'lost generation' of young persons wasting away at trading centres engaged in unproductive habits like gambling. Yet these same persons, during electioneering seasons, are campaign foot soldiers for our politicians after being bribed with few handouts!

The problem is, we have skilled youths who are employable but cannot find jobs, or lack initiatives to better themselves, and have given up on hope!

What of the water issue? His predecessor initiated projects that were ostensibly aimed at resolving this perennial issue. On the surface, it seems so, but delving deeper into the matter returns a complete picture. An example is the Wanyororo A Water Project, which, according to my sources (though claims unverified), was supposed to benefit a private school owned by a renowned tycoon more than the residents themselves. Are we witnessing the situation where the rich will have water and sell it to the poor? Will the leader rectify this or let the status quo be?

Why are some projects like the Wanyororo polytechnic moribund? What technical courses are our youths benefitting from? It seems its location was not well thought. By the way, does technical courses comprise only of dress making and hair therapy as alleged that is all the polytechnic had to teach?

What of adequate street lighting? How can a whole trading centre that is a nerve of the village economy lack a mulika mwizi with only three low wattage bulbs hanging on eaves of building serving to light the place?

As an educationist, and owner of a private school, the leader will no doubt put premium on educational matters. It is not clear when it comes to bursaries, deserving cases will be overlooked or amount dispensed be next to nothing, that the poor will have to dig deep and educate their children.

It is still too early to speculate on kind of leader we have in Machembu Chege. What of these allegations of serving vested interests who can pull strings at will?