The Changing Face of Ol Kalou 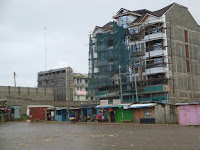 Against the backdrop of the debate whether Nyandarua County headquarters should be in Nyahururu or Ol Kalou town, it is imperative the latter is showing much in terms of growth and investors confidentiality. A host of storied buildings are coming up on every other corner of this one street town as investors, particularly real estate developers, flocks in.

The main town street, unfortunately, is not paved, and when contrasted with the recently cobblestoned matatu terminus, makes for an ironical observation when it rains as being the muddy strip connecting the town to the tarmarked main roads (Ol Kalou-Dundori and Ol Kalou-Nyahururu-Gilgil routes).

If the metre gauge rail line passing through the town is revived, in line with the vision of the late Nyeri governor, Wahome Gakuru, the town will likely witness growth and especially the transportation of farm produce to other markets in the country as agriculture forms the backbone of its economy. However, quarrying of building bricks does take place not far from the town but sand and ballast has to be sourced from far off in Nakuru County. 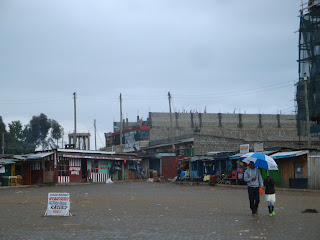 “This makes it expensive for many builders as the end result is pushing up construction costs,” says Solomon Thuo, a real estate developer. For instance, a double lorry of building sand at source of purchase at Pipeline in Nakuru is Sh9, 000. Transporting the same to Ol Kalou will see the builder part with more than this. According to Michael Kimani, a transporter, the overall cost of purchasing and transportation comes to Sh23, 000, meaning it is dear to transport than to purchase. This may explain why some buildings even right in town are semi-permanent – though they are giving way to modern ones.

For long, poor infrastructure had dogged the town until the coming of the devolved government units. Thuo says this was to blame for sluggish development as the town was more of an agricultural outpost than a commercial hub, but this is changing. With few bank branches, Saccos, supermarkets and mini-marts making an imprint into the town and investment in hospitality sector (especially lodgings), there’s an air for investor optimism. 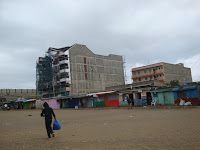 And the authorities need to do more. Paving of the town’s road should have been prioritized, and so is finding good designated parking lots other than converting the sidewalks into parking zones especially on the sides of the Ol Kalou-Dundori route close to the railway crossing. And here lies the problem as in future the road will need to be dualled to accommodate more traffic. Traders too feel the authorities are a letdown yet they are paying market cess fee with little services provision. Mr Francis Njenga, a trader in the open market behind the recently refurbished matatu termini, feels there is little in terms of services provision by the county government.

“If the county government had seen wisdom in putting a roof over us, we would not have been under mercies of weather whenever the skies open,” he says.

An official at the county government, who did not want his name used as he is not at liberty to speak on behalf of the county, says more is being done to make the town more of an investor attraction and cites some of ongoing infrastructural projects.

And despite the town boasting of few storied buildings, none boasts of a lift as most of them are four storied edifices.