Who Said Partners in a Union are Perfect? 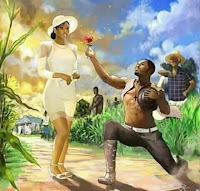 After that elaborate wedding ceremony, there comes a time to make adjustments to accommodate each other as couples begins their long (or short-lived) married lives.

If the courtship period preceding the marriage was the shortest time, there are some habits and traits that each of the pair failed to notice in the other one. The first few months in marital bliss can be awkward for such couples and it all boils down to trying to correct each other.

Granted, no union is perfect. And no partner is perfect either. Each partner sees an imperfection in the other and tries to correct this. But no one wants to be corrected as some of the picked habits have become integral in an individual's life and may construe a part of their psyches. It may be chaotic trying to correct the other's mannerisms.

During courtship, couples falls over themselves trying to impress each one. Each of partners professionally manages to conceal their strange habits as they expertly cultivate that out of posters personality that fools the other. They project the ideal image of a perfect person that will make an ideal life partner. No sooner do they settle down than these masks slowly fall down leaving the other to wonder if they married the right person.

A divorcee mother of two who hustles for a living says of her ex, "he was gentlemanly and has a cool demeanour. I knew he was the perfect guy and was willing to do anything to settle down with him."

But he was to change overnight shortly after walking her down the aisle.

"He'd erupt like a volcano over minor differences. I didn't know there was a hidden personality beyond his projected calm one," she says.

There were some manners she didn't like. The man had the habit of chewing loudly and speaking with a full mouth sending food blobs flying. "I tried to correct this but gave up on him seeing he couldn't change," she says. At times, she says, the man would put a spoonful of hot food in his mouth and proceed to 'cool' it by exhaling air out loudly in a childish way.

While they were courting, he was a different cut of a cloth altogether. He seemed to be cultured in his mannerisms and was a slow eater. He would chew 'thoughtfully' with a closed mouth and would rarely speak with food in mouth. He would leave something on the plate for waiters/waitresses to clean in the many of hotels they visited. But in their marriage, he would leave a shining plate that needed only rinsing before placing it on the drying rack.

She adds the man was always absentminded leaving things in unusual places. "You could find one sock in the bathroom and the other in bedroom or sitting room and he would be all fussy about the missing item," she says.

A mid-thirties man who describes himself as 'single and searching'  says his ex was problematic to live with from the start. He didn't approve of the way she would dress to work in many instances.

"I did not like her liberal styles of dressings and we were constantly arguing," he says.
He couldn't understand why a married woman would opt for attires that she outgrew as a baby. "I didn't approve of 'tumbo' cuts or short skirts that would peel up all the way to her nether regions when she sat down and had to constantly pull them down," he says.

It always embarrassed him to see almost everybody drooling after her. And if the two were preparing to go places, she had to keep him waiting as she took long preening before a mirror in putting up heavy makeovers. She would step out looking like a ghost.

"She only wanted to be the centre of attention. I kept wondering who she was impressing dressing like that but her line of argument was always the society had grown tolerant with her likes and I shouldn't lecture her," he says.

He had to weather many criticisms as word had it he had married a woman of easy virtues if her dressing was anything to go by. She loved low cut blouses that exposed her ample cleavage, especially in showing off a tattoo in one of her breasts.

Whereas she was spotless clean, their house was always messy. She failed all her housewifely duties as she flirted from one crowd to the next like a social butterfly. He couldn't reign on her and they parted ways.

"That is the problem of marrying a mtaani (urban) girl who was headstrong in every department," he says.

But some partners, rather than be fed up with each other, have learned to accommodate and tolerate the habits of each other. Take one example of this lady.

"There are instances he places smelly feet on table when he comes home and I have visitors. At times, he never acknowledges them and this is very discomforting that I have to apologize to them," she says.

She complains the hubby hurls her all manners of expletives if she makes a slight mistake in anything but it is always a case different when it comes to him.

"If I accidently steps on him, he calls me names asking if I'm blind or something yet when we were courting, he would smile this off as nothing serious!" she says.

He is, however, intolerant of her and deems himself as perfect while he seeing her as one chockfull of mistakes and flaws and needs correcting!

There are times her cooking is not good and he compares his mother's or another woman's cooking to hers in a bust of emotional anger.

"It is disheartening and he cannot appreciate the efforts put in making that cooking," she laments.
Another of her habit with her bwana is his love of going to bed with almost all his clothes on. "He doesn't take off some clothes like shirt or trousers and this hampers our love making sessions most of time," she says.

A marriage counsellor who goes by name of Faith, says the marriage institution is one of the hardest to master in the school of life. It calls for more than sacrifice in accommodating and tolerating the habits of the other partner.

"Couples will never be on the same page over many issues. They may not like what they see in the other partner and this calls for understanding and tolerating the other one," she says.

In surmising, she says it is better to have prolonged courtship period that will bring out the true nature of the other partner. "If you are used to seeing each other in your Sunday best, what will be your take when you settle down and realize the other partner smells like a pig at mere trickle of a sweat or looks ugly without any makeups?"