My downfall to the pits of alcoholism....and living to tell the story! 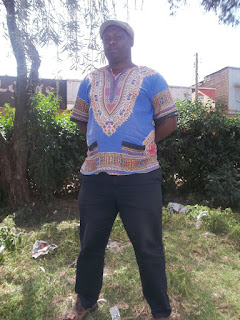 My name is Isaiah Kagiri Waititu. I teach geography and business studies at Gatero Day Secondary School in Laikipia County and has been to the abysmal depths of alcoholism and back. I grappled with alcoholism demon for close to 20 years. A duration in which I would get employed and abscond duty, or get sacked, from 10 private schools! I would get in and out of two relationships in the process in addition to doing immeasurable disservice to scores of secondary school students. Today, I had since been rehabilitated and I am a staunch anti-alcoholism and drugs crusader working with several organisations.

I began sneaking out of school to take chang’aa and other cheap brews while I was in form two at Leshau High school in 1993. You see, I hail from Leshau area of Nyandarua County and therefore knew the school’s backyard well. A glass of the killer brew was retailing at ten shillings then. Surprisingly, I managed to score a B- (minus) of 66 points in the KCSE.

I was born in 1976 as the third born in a family of seven children. I believe its peer pressure that pushed me to alcoholism for nobody else in our family had this problem. My drinking problem intensified after my form four in 1995 while I was waiting to join university. However, I was to work as a lorry loader in Nairobi first.

I would drink cheap liquor and take the drug Kubel with the little money I would earn as a loader. I later joined the kikuyu campus of the University of Nairobi in 1997 to do education. Campus freedom was to lead me to deeper alcoholism. I would frequent the drinking shebens of Thogoto and Dagoreti. At one point, I would even buy chang’aa and other cheap liquors and repackage them for selling at campus to earn more money.

Life was on a roller coaster of inebriation and missing classes in campus but I eventually graduated with bachelors of education in 2001. There was a hitch as I had squandered all fees in third and fourth year and therefore could not get my degree certificate. I had to search for a job, regardless. I started at a secondary school which is a stone throw from my home under the employ of the board of management in 2003. You would have thought this was a time to posit a good image of myself as I was working but would drink every penny earned. I would desert duty for even three weeks in a row to brew my own chang’aa. The reason I kept on deserting and coming back is that there were very few teachers in that school. But luckily along the way, and seven more schools, I managed to raise enough cash to liberate my degree certificate at campus in 2008.

With my papers, my salary would be better now, but, ironically, my drinking would also intensify. The longest I would last in any school was one term. In 2012 I applied for and got a teachers service commission job at Thiru secondary school in Laikipia.

In government employ now, I would continue drinking to my ill health. I developed paranoia and suicidal thoughts and would hallucinate that I was hospitalised for days. When I came out, I continued with my imbibing ways and would be an inpatient again.  This time I was vomiting blood. Before the onset of this problem, I would hardly eat but drank on an empty stomach. I would retch at the sight or smell of food.

When I got discharged, I descended back to alcohol. I would get to school quite early, teach a few lessons and abscond for the rest of the day. At some point, the board of management met and recommended I go for counseling. In July 2013 I took a three months sick leave and booked myself in a Nyahururu rehab facility. But after only one day at the facility, I jumped over the fence at night and fled to go drinking.

Everybody seemed concerned about me. It took the concerted effort of the local police, a local charitable organisation by name of The Saint Martin Social Apostolate, and my wife to take me to Oasis of Hope rehab in Kiserian. It would take me 90 days to be on the path to full recovery. While there I would be interdicted by the TSC; the last my head teacher heard of me was when I fled from the rehab. But this suspension would be lifted when I explained my absence and I would be posted to my present school.

Today, I am advocating against the use of alcohol and other substance abuse. I counsels the youth against the dangers of alcohol as well as those who are trying to kick out this habit. Alcoholism has ruined the once promising persons and made them a liability not only to their families but to the society as well. I would not wish even my worst enemy to take the path I traversed. I have been to hell, and back, literally speaking.