The Mwauras: We found a Calling in Gospel Music 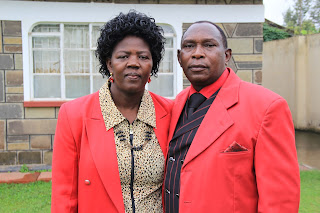 I can say that we unofficially launched our gospel ministry during our wedding day in November of 1988. I had met my wife, Lydia Indeche Were, during our student days at the Kenya Technical Trainers College (KTTC) and ours was love at first sight.

There was one thing we shared in common, we loved singing. We were active members of the college’s Christian Union and were also involved in worship and praise activities as well. However, music is something I traces down in my family line.

I (George Mwaura Ngotho) was born in Kipkabus in Kerio Valley in Eldoret to a polygamous father. He had two wives and seventeen children. I come from his first wife who bore him ten children. The other mother had seven children. The old man was ingenious in that he saw great potential in his many children. He took scriptures seriously in seeing children as a blessing and a heritage from the Lord, and the one who had a quiver full of them was blessed indeed. As a sign of giving thanks to God, he cobbled a choir comprising mainly of we children which he named Ngotho Choir, and which had ten children at most from both wives. It derived its name from him, for his names were Isaac Ngotho Njuguna. He passed on not long ago at a ripe age of 92 years. We would sing at Shangwe A.I.C Eldoret Church where we fellowshipped. An elder brother, now deceased, was our choir master.

As I was saying, during our wedding day, we requested to be given an opportunity to sing. My wife took the microphone and I took the guitar. We electrified the crowd belting one rendition after another. Everybody was on their feet dancing and cheering. What a way to celebrate our union!

The news of our singing spread widely and it inspired us to continue singing after our wedding. Thus began our music ministry. We began recording and releasing songs that got massive airplay in the media. Our first album was titled “Yesu yu Mbele Nafuata (Jesus is ahead as I follow)” and was released on 30th June, 1990.  This saw us getting the attention of Kenyans that we began receiving invites to grace functions and church events. As we were still teachers, we had to do delicate balancing act between teaching and our music ministry.

At the time, it saddened us to learn that our music was being pirated. We did not complain but shouldered on as we saw this as an opportunity to spread the gospel.

And a door opening opportunity did our music prove to be. We began touring the world to perform. One memorable event that is indelible in my mind is while we were performing in the State of California in USA and this Kenyan residing there came looking for us. He told us he was about to commit suicide, but, after listening to our music, he was greatly touched. He repented and got saved and I saw the power of music as an evangelizing tool from that day.

We laud the Kenya Christian Fellowship in America (KCFA) for helping us connect with many friends worldwide. It has been instrumental in making our music college here in Nakuru an international institute in the music industry.

In our singing heydays, our music was scripturally themed. It carried gospel message that was meant to worship and glorify God and, at the same time, carrying messages of hope to a dying world. Unfortunately, what we are seeing the gospel artistes doing nowadays is seeking fame and money. You can see this for yourself for, if these artistes are invited to grace functions, they will first ask what amount of money they will be paid. The same goes in saying their testimonies are questionable if their mode of dressing, ostentatious display of wealth and other unethical behaviours are anything to go by. Though there is still a small remnant in the industry doing the ministry and not seeking personal gains.

What is in the market today in name of gospel music is actually entertainment. We see gospel artistes seeking self-gratification more than glorifying God with their music. The songs simply have no spiritual message. Something needs to be done here. I can say pastors or spiritual leaders are largely to blame. They do not take time to teach and train upcoming gospel musicians on what is true worship. Also, the artistes are on their own and not willing to allow mentorship or to be accountable to anyone.  A father mentor, or a spiritual authority, is needed to guide them. What we watch on televisions playing as gospel music is becoming raunchy with unearthly beats and devoid of any soul uplifting messages. The same can be witnessed in how the gospel has been commercialized in some quarters. It is sad.

I cannot end without mentioning the great inspirations in our music ministry. Amongst others, we rank Mary Atieno and Charles Mulima highly. We loved the way they composed their songs based on God’s word. Their songs and messages are still relevant today.

Kenyans, lets always be thankful to God in whatever way we can. Not all of us can sing but we all can be joyous and thankful at all times. For example, none of our three children is talented vocally but they take part in worship service. Our daughter is amongst the best dancers in the choir while out two sons are instrumentalists in the church.