Of the Media and Dumbed Down Sheeple 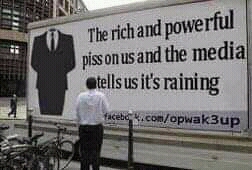 Whoever controls the media controls the kind of narrative the masses will hear. And where the government has a stake, the sheeple have been dumbed down by well coordinated narratives when it comes to discoursing issues of national importance.

For a full week, the Kenyan media was full of glowing tributes with acres of pages or airtime devoted at lionizing the former head of state. Going by the positive reviews our media gives every politician with a large stature upon taking the final worldly bow, it is evident that all the political sins, both of omission or commission, are whitewashed and the departed celebrated as a saint!


If there is a special designated burial ground for saints and martyrs, all Kenyan politicians would have been interred there, with their tombs and mausoleums regarded as sacred shrines of sorts where millions would be paying yearly pilgrimages during anniversaries. And given the bottomless pockets of our irredeemable corrupt politicians, I’m sure the Vatican would not hesitate to declare certain politicians affiliated with that denomination as saints on account of political miracles attributed to their intercessions! When the church is currently bedfellow with the state, everything is possible.

The political miracle of our time is the so called ‘handshake’ that has birthed a document known as Building Bridges Initiative. It is not clear if the ghosts of Jomo and Jaramogi sat together somewhere in the hereafter after witnessing a trend of bloodied souls joining them every time Kenya has a General Election, and telepathically influenced their scions to sit together and find a solution. There’s a rumour the latter may be declared joint Nobel Peace Prize recipients following their highly publicized tour of the US, yet the country the handshake purportedly healed from poll related ethnic antagonisms is as divided as ever!

Back to the media, the rich and powerful controls a sizeable share of broadcast and print media in the country. It is surprising to see how the seasoned and perceived independent journalists were falling over themselves crooning political hosannas with their write-ups after the demise of the second president. No one had the guts of writing the man’s dark side, other than acknowledging in a passing blurb his failing as a human being, and sweeping under the rug the unmentioned ‘failings’ than open a can of worms!

I don’t blame such journalists. Trading one’s integrity for a brown envelope to advance a different narrative is a worldwide practice, though unethical. Look at the mainstream Western media. It is no wonder they have earned a moniker of ‘presstitutes’ for trading their integrity with the governments of the day. If, for example, the US wants to militarily invade a nation, its government has influential journalists and editors hyping the masses with a narrative to support the war cause. Look at the present state of a handful of nations the US supported their governments to invade like Iraq, Afghanistan, Libya, and so on, where the gullible US public is as guilty as its government for war crimes.

The local ‘presstitute’ has a different moniker though. Shortly after the 2017 General Election, when the State elected to honour one voter with a state commendation for the ‘brave act’ of eating githeri while on the voters queue, the media instantly earned the tag of githeri media, which is close to being fake news houses.

This has the unfortunate effect of diminishing ratings of credible media houses with many young people consuming news from alternative sites, mainly online blog sites, where bloggers behind the sites have tendencies of circulating ‘raw facts’ to a story, and not the watered down version of same the mainstream media would prefer for legal reasons. And it is not surprising the government wants to completely muzzle alternative sites with its contentious cybercrime law.

A controlled media has no soul. When the print media had story after story why we should forgive and forget any political atrocities committed by past and present leaders, or talking heads were panelists drumming the same on the screens, one is left wondering aloud; what about the victims of such injustices?

But the message had been passed and the dumbed down masses can do nothing other than to agree.

For long, I’ve been an avid literature lover. Back then, I could read huge tomes as a pastime. Books and I were constant companions. Th...