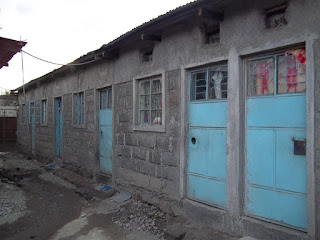 There’s a joke about a miffed tenant who sent his landlord a queer text message. The message simply read, ‘This is to inform you that the tenant next door is smelling’. Whether this sender wanted the fellow tenant kicked out or to be allocated a room far from the smelly occupant is not evident. But the pun aside, many people lead harried lives that they scarcely have time for personal hygiene or keeping orderly houses.

Oftentimes, tenants complain of being overcharged for run-down rental units without landlords providing reasonable, pleasant places to live. Many argues this amounts to extortion as it doesn’t make sense for one to keep putting in drab rooms they dearly pays for. There could be merit to their arguments but landlords are cagey instead blaming their tenants for the dire status of houses they rent. According to some landlords interviewed, some feels tenants are negligent failing to acknowledge that damage to properties they occupies comes along with costs to house owners.

Moses Wahinya, a landlord in Nakuru, has an agreement with his tenants whereby, tenants are expected to meet the costs of repairs should they incur damage to his property. If, for example, a window or a door is damaged by a particular occupant of a house, that tenant must be responsible for that damage, though at times, he meets some repair costs on his own.

He complains that some tenants goes contrary to their agreement by putting unauthorized structures within his plot.

In one plot, for instance, a tenant had erected an illegal structure fronting the house he had rented to house fowls and goats. This semi-permanent structure blighted the place that he ordered for its demolition and had the tenant evicted following complaints from the other renters. The place is peri-urban but some tenants around had flouted by-laws in keeping animals. The place smelt like a livestock auction market than a residential plot.

He also decries how one of his tenants had audacity abuse his tenancy agreement by subletting the house to another tenant without his knowledge. It happened when one tenant moved out of his plot and brought someone else to live there. What Mr Wahinya was informed by his tenant was that a relative was taking care of the house while he (the tenant), had moved to work somewhere far. This arrangement went on for some months where the ‘relative’ would pay the ‘working’ tenant who in turn would remit monthly rent to Mr Wahinya. And through this process, the duplicate landlord would get a ‘commission’, mainly the difference of skimming the extra rent charge which was a way above what the real landlord was charging.

“It is true there are wily tenants out there who can bring in someone in a room they negotiates with you but goes to get someone willing to pay a little more to what you’re charging,” he says.

Another instance he shares is how the ceiling of one of his house was blackened over time by one tenant who had this habit of lighting charcoal blazer and cooking in the living room. By the time this ‘dirty’ tenant left, the ceiling had to be reworked with cans of paint and the grimy room walls given an equal coat of fresh painting.

“The walls were grimed with all manner of hard substances which ranged to dried up residuals of mucus,” he says.

Isaac Ndung’u, a landlord in Nyahururu too, had similar problems with his tenants. Many are the times he’s to meet the costs of unclogging toilet drainage of his high rise apartment as some ‘ignorant’ tenants’ uses hard paper. Despite the appeal for use of soft tissue papers, it is hard to try to change attitudes of some of his tenants. He too gripes about method of garbage disposal by some who simply tosses refuse or food remains from the balcony to a dirt earth public road below at night. Though each household is requested to collect refuse in large polythene bags for eventual collection by garbage truck once every week, some have opted to discard refuse in unorthodox ways. The belief is stray dogs passing by will make good use of some edible food leftovers.

“Each house is charged a little fee for garbage disposal but not all seem to dispose of same in a good way,” he laments.

On another plot on outskirts of the town, the state of common toilet used by all tenants there is sometimes wanting. Children, and, in cases, adults, do not use the toilet properly. The appeal written at the door in bold reads, ‘Clean after use’, seems to have been largely ignored for long.

This called for measures for the facility to be kept clean by all. From the eight or so tenants in the plot, it was agreed a duty roster should be drawn in which tenants would take turns in keeping the toilet clean. Many didn’t take this kindly saying it was demeaning to be ‘punished’ like errant school kids cleaning after the mess of other.

“The singles were hard to deal with. They felt like they were being compelled to clean diapers for ‘overgrown babies’ who were rational enough to know what they were doing,” he says.

He opines that tenants should not see landlords’ roles as merely providing boarding and lodging facilities. They too are required to do something to contribute to the wellness of the environment in which they live.

He tells of a tenant who housed quails in the room he slept in several wooden cages. This was at the height of the much hyped quail rearing project before it assumed a pyramid scheme like status. Though the tenant would take the cages out during daylight, how he managed to put up with birds in a single room with a small family at night beats logic. It was contrary to tenancy agreement and it was either he vacated the house with the noisy birds or get rid of them.

He adds that not all cases of landlords’ arbitrarily hiking up rents are genuine. Economic factors like the case of inflation, maintenance costs and other market factors in real estate industry may play a part. The notion that rent costs should always be constant throughout the year is simply wishful thinking, he says, pointing out the differentiation between leasing and renting. In leasing, price may be constant annually as per lease agreement but its different when it comes to renting. Besides, Mr Ndung’u says, there’s a rent tribunal where tenants can go to if they feel rents are arbitrarily being hiked up.

On complaints landlords are ‘heartless’ beings even when tenants had pleaded for more time to clear rent arrears, he says no business operates on sympathetic grounds.

“Forceful evictions and confiscation of defaulters’ property doesn’t stem from a landlord being heartless. Agreements are agreements and are binding, whether orally entered into or written. If one wishes to move out, he or she must inform the landlord beforehand in oral or written communication and the landlord must be present to ensure the house being vacated is left in good state with no outstanding issues being there between the landlord and tenant,” he says.

But as John Karuga, a landlord in Ol Kalao, found out, some tenants can walkout without notifying landlords or clearing up pending arrears.

He had a tenant who packed and left at the dead of the night and relocating to an unknown place. He left with a colossal outstanding rent arrear and is yet to be traced to date. The comforting thing, however, is that the elderly landlord no longer collects rent personally but through an agent. He has captured all details of his present tenants in case of defaulting and leaving the premises unnoticed.

He believes some tenants’ takes advantage of ‘soft’ landlords to put up piteous cries to be allowed to stay long after rent is overdue. Some whines of rent being too high the moment the landlord shows at their doors.

“But this is not the case. Before moving in, its clear the complaining tenants entered into agreements with their landlords’ and are comfortable with the terms but only to raise a ruckus come pay day,” he says.

He avers its true some landlords’ overcharges for houses that are wanting. A tenant has the right to refuse to move in or demand for better house reflective of what he is being charged. Tenants’ should not be means for few unscrupulous individuals giving the real estate sector a bad name to enrich themselves without justifying the cause why the units are costly. More, the place may be wanting in terms of sewerage and garbage disposal or may pose health hazards to occupants.