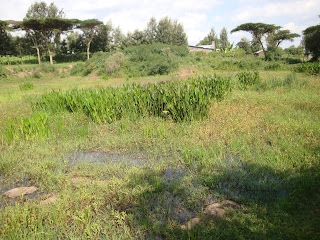 To a villager, water rationing is an unheard of thing mostly associated with urban places. But for most villages in Bahati Constituency in Nakuru County, especially for homes connected with pipes or those sharing water resources trickling down rivers, this is a reality they are grasping with.

To begin with, the rivers dried long ago. River beds cutting across some villages serve as testament of once lively rivers that housed aquatic life at one stage in their lives. A look of the Wanyororo River, which for long had been the lifeline of several villages downstream from Dundori hills, where it originates from, captures the sad state of vital resources.

Once upon a time, there was a river. It traced its origin from marshy swamps high up thick forested hills. At its youthful stage, when its currents are strong, its waters flew over a tablet like stone in a mini-waterfall. As the crystalline waters cascaded below, beautiful rainbows formed when sunlight reflected on the ever forming droplets.

The river snaked its way widening its width to accommodate brownish waters as it gained in strength cutting across cultivated and onwards through the villages of Mombasa, Wanyororo, Giachong’e and Murunyu. The roar of water could be heard, especially during the rainy peaks, for miles around. It was a danger to cross that makeshift bridges had to be erected in numerous of places to save lives. We are not speaking of era of substandard bridges devolved governments units are launching with much fanfare through cutting of ribbons – and which are costing taxpayers astronomically.

The colonial government of the time saw the great potential of this semi-Nile river. It dammed it into three places namely at Mombasa and Wanyororo villages (two dams in latter). In lean season, the Mombasa dam would release water down to Wanyororo ‘I’ dam which in turn would release it to Wanyororo ‘II’ dam. Thus, during the three dry months, residents were assured of steady water supply.

The settler farmers close to Wanyororo ‘I’ dam had in fact harnessed the river’s waters by constructing an artificial waterfall that turned a water wheel to provide power to light their houses with – a project that didn’t see the light of the day as the agitation for independence was in high gear then.  Today, these homes form part of Wanyororo and Kianda primary schools respectively. Sadly, the school management vandalized the mini-waterfall in procuring building blocks for additional classes.

Except for Wanyororo ‘I’ dam, which was overrun with marshy reeds, the other two dams were clear such that, if you were in an elevated place like Bavuni hills, you could see their ‘bluish’ waters. (By the way, why do water bodies, even forests, appear blue from a distance?). 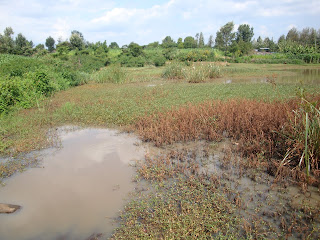 Today, you may need a giant telescope in finding any of these dams from an elevated position. A low earth satellite would highly return photos resembling those of artificial ponds after a heavy downpour.
The dams are simply a mass of green aquatic weeds with patches of greenish water in places. The once giant river of the yore is today a seasonal rivulet flowing whenever it rains.

And here is how the slow death of this river began.

At the height of the Nyayo regime, some farmers bordering the Bavuni/Wanyororo/Dundori hills were given parcels of forest land to cultivate. This was in name of ‘political correctness’, when buying loyalty saw misappropriation of natural resources. Although the idea was disguised as intended to address food security in a food secure area, it went beyond this.

Private saw millers were dished with permits to indiscriminately cut down trees, without replacing any.
The results were not long in coming.

The once dense carpet of green forest, viewed from air, was no more. Riparian areas were laid bare. Fertilizers leached into the river such that, when the contaminated soils were carried downstream and into the dams, weeds of every shade took hold overnight. The dams’ depths shrunk owing to siltation.

Whereas communities residing along the general river path were assured of steady water supply throughout the year, the narrative changed. Trekking long distance in search of this vital commodity has become a new order. Those connected to piped water are seeing dry taps or contending with intermittent water supply - once in a week.

Efforts to restore the forest and return the river and the dams to their former glory have not borne much fruits. The Kibaki regime did see the reclamation of forestland with thousands of trees planted. Although it will take decades for hills to assume their lost glory, the drying up of riparian parts, should be the case for worry.

The current Bahati Constituency legislator, Kimani Ngunjiri, had been quoted as saying Sh66 million had been earmarked for rehabilitation of two dams in the Dundori forest under Constituency Development Fund. Frankly speaking, no dams exist in the forest, and there is no clarification whether he was referring to the three dams mentioned above. Although when the Bahati Constituency was part of the larger Subukia one, the three dams were rehabilitated under the Subukia CDF programme, where thousands of shillings were sunk in, and were messed upsetting the ecological balance of the area.

The onus of the blame, according to Dundori Ward MCA, Steve Kihara, lies with the directors of the Wanyororo Farmers Company limited. He was quoted as saying these officials had been mismanaging communal land, where the dams and wetlands are located, like personal properties. Since the company was formed in 1980s, it had never conducted any Annual General Meeting in its three decades existence. This is surprising going by the registrar of societies records as the group is still listed as active. It beggars question as to whose interests the directors are advancing, considering the grabbing of social amenities under their watch.


Though experts contend restoration of the river will take ages, conscientious voices, especially from the young generation, are gaining momentum. Already, a youth lobby group had been going around collecting signatures and hearing views from affected villagers intending to petition the National Environment Management Authority to do something.

The general consensus, however, is that the river is as dead as a dodo.

Once upon a time, where this dry valley cuts across the villages, was a river.  And the river was lively with aquatic animals and plants. Its fast flowing waters sang as soothing music to ears of wayfarers who rested by the banks to quench their thirst or to dip their weary feet for cooling effect.

It was the lifeline of many a village and irrigated farms bordering its banks.

In many of its meandering points where currents were not strong, livestock would be driven to be watered at.

Many a weekend some families would be seen doing laundry by the banks of the river or by the dams’ sides as children swam across and others hunted for trout. That narrative is no more.

There was a river…… and there were three dams….

There is now a seasonal stream that pretends to be a river and there are now three giant ponds pretending to be dams! 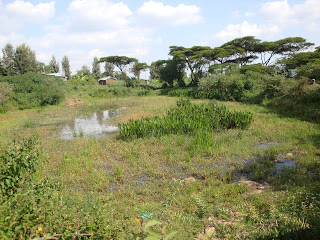 And there was a dark, thick forest that protected wetland and kept the climate of the place constant throughout the years…..but today the forest cover is a percentage of its former glory and the hills are bare like one stripped and exposed of nakedness. The climate change is seeing the once food sustainable areas becoming food dependent ones…for the harvests are erratic.

Who will speak for the river…and the dams?